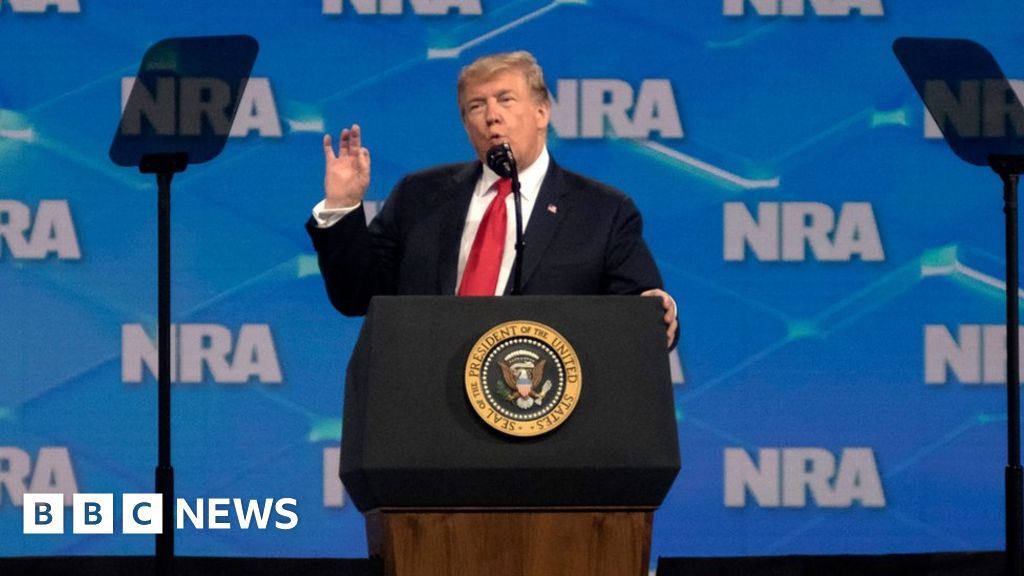 US president Donald Trump has said he will withdraw the US from the international Arms Trade Treaty.

The agreement, signed by Barack Obama in 2013, aims to regulate the sale of weapons between countries.

The US National Rifle Association warns that it amounts to international gun control, and is a threat to the second amendment right to bear arms.

Speaking at the lobbying group’s annual meeting, Mr Trump said he would ask the US Senate not to ratify the pact.

The US is the world’s top arms exporter. Its weapons sales are 58% higher than those of Russia, the world’s second largest exporter.

“We’re taking our signature back,” the president said at the meeting in Indianapolis, adding that the UN would soon receive formal notice of the US’s withdrawal from the Arms Trade Treaty (ATT).

“Under my administration, we will never surrender American sovereignty to anyone,” he said. “We will never allow foreign bureaucrats to trample on your second amendment freedoms.”

In a statement released after Mr Trump’s speech, the White House said the treaty “fails to truly address the problem of irresponsible arms transfers” because other top-10 arms exporters – including Russia and China – have not signed up to it.

Officials from the UN told Reuters news agency it was unaware that Mr Trump was planning to take the US out of the pact.

What has the reaction been?

“The United States will now lock arms with Iran, North Korea and Syria as non-signatories to this historic treaty whose sole purpose is to protect innocent people from deadly weapons,” said Oxfam America President Abby Maxman.

Internationally, there was a sharp rebuke from Britain’s shadow foreign secretary who called Mr Trump “a disgrace to his office”.

Emily Thornberry’s tweet added: “Donald Trump’s statement on the Arms Trade Treaty is the final confirmation that he is not the Leader of the Free World, he never has been, and he does not deserve the honour of a State Visit to Britain.”

However, Ted Bromund of the conservative US think tank The Heritage Foundation, criticised the treaty, saying it could “only have the perverse effects of driving potential importers to buy from China or Russia” and other nations that are not party to the agreement.

What is the Arms Trade Treaty?

The ATT was signed by 130 nations in 2013, and officially came into law the following year.

It requires states to monitor their arms exports, and to ensure their weapons sales don’t break existing arms embargoes.

Nations also need to ensure the weapons they export don’t end up being used for genocide, crimes against humanity, war crimes or terrorist acts. If they do find out the arms will be used for any of these, they need to stop the transfer.

The pact has been signed and ratified by 101 countries so far – including Germany, France and the UK. The US is among another 29 nations that signed the treaty but have not ratified it to make it law.

The White House claims some groups try to use the treaty to overturn “sovereign national decisions” on arms sales, specifically pointing to attempts to block the UK’s sale of weapons to Saudi Arabia.

The sale of arms to Saudi Arabia by western countries has been highly contentious because of the use of those weapons in air strikes in Yemen, that have killed and injured thousands of civilians.

UK blocks aerospace takeover by US investor over security