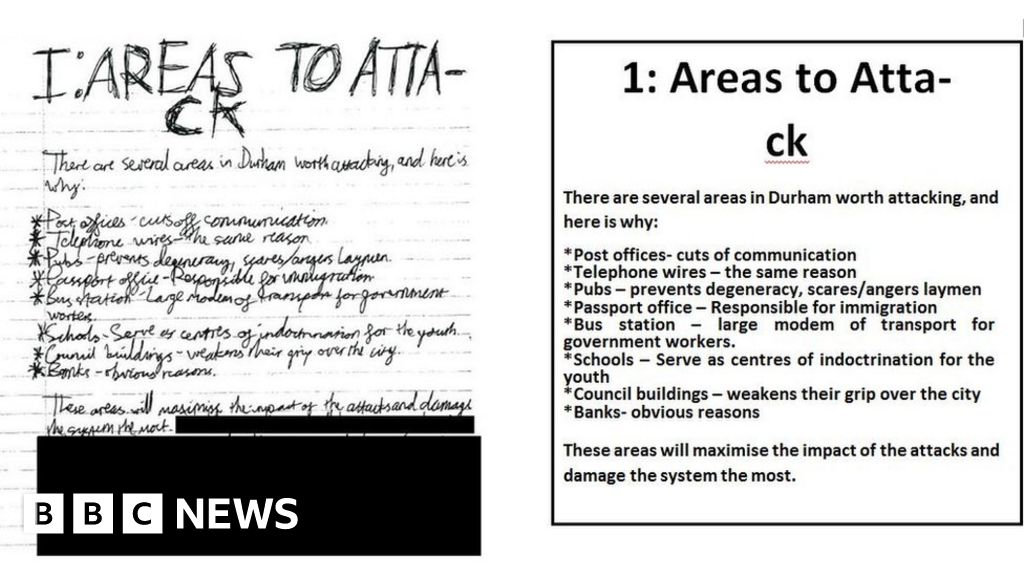 A teenage neo-Nazi who wrote about an “inevitable race war” in his diary and identified a series of possible targets has been convicted of preparing terrorist acts.

The 16-year-old from Durham listed the locations in his “guerrilla warfare” manual, Manchester Crown Court heard.

He was convicted of six terror offences and will be sentenced on 7 January.

The boy is the youngest person to be convicted of planning a terrorist attack in the UK.

Jurors heard the boy, who described himself as a “natural sadist”, began drafting a “manual for practical sensible guerrilla warfare against the kike [offensive term for Jewish] system in Durham City area”.

The manual listed “means of attack” and “areas to attack”, which listed local venues “worth attacking” such as post offices, pubs and schools.

A “things to do” list from August 2018 included the words “shed empathy” alongside a hand-drawn symbol of the Order of Nine Angles, which the court heard was a “self-consciously, explicitly malevolent” Satanic organisation.

The jury found the boy, who cannot be named for legal reasons, guilty of preparation of terrorist acts between October 2017 and March this year.

He was convicted of preparing terrorist acts, disseminating a terrorist publication, possessing an article for a purpose connected to terrorism and three counts of possessing documents useful to someone preparing acts of terrorism.

Jurors heard that, in the course of his internet searches, he looked for a “map of synagogues in the UK”, “Newcastle synagogue”, and that he wrote of planning to conduct an arson spree targeting synagogues in the Durham area using Molotov cocktails.

He also visited websites on firearms and was in communication with a gun auctioneer.

European elections 2019: Polls to take place across the UK

Media playback is unsupported on your device China is marking the Lunar New Year, one of the most important dates