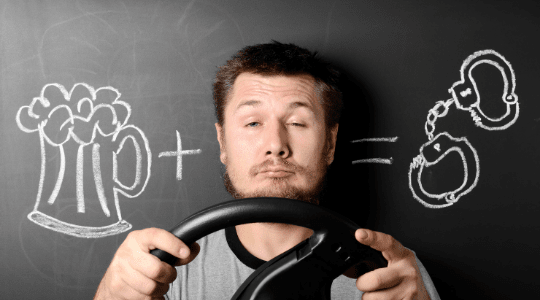 So now we can look at some common DUI myths and misconceptions. Here is a list of situations in which, even assuming you are clearly intoxicated, many people believe you CANNOT be convicted of a DUI. What do you think?

I’ll give you the answers a little later in the article, but first, we need to do a more in-depth analysis of the “DUI statute” which I have streamlined for easy reading:

Sec. 11-501. Driving while under the influence of alcohol

A person shall not drive or be in actual physical control of any vehicle within this State while:

2) Under the influence of alcohol

In People v. Davis, 562 N.E.2d 1152 (1990), the court held, in determining physical control, that “a motorist need not be actually driving a vehicle in order to be in actual physical control of it…. defendant’s intent to put the car in motion is irrelevant to that determination.” In that case, the defendant was found asleep, in the backseat, zipped up in a sleeping bag, and the car was not running. He was found to be in “physical control.”

The next part of the statue that we’ll examine is the language that reads “any vehicle.” What exactly does that mean? Surely it means cars, trucks, buses, and motorcycles, right? Anything else? Let’s look at the definition of vehicle:

Sec. 1-217. Vehicle. Every device, in, upon or by which any person or property is or may be transported or drawn upon a highway or requiring a certificate of title under Section 3-101(d) of this Code, except devices moved by human power, devices used exclusively upon stationary rails or tracks and snowmobiles as defined in the Snowmobile Registration and Safety Act.

This statute indicates that devices moved by human power are NOT vehicles, so bicycles, tricycles, and rollerblades are not considered vehicles. However, if you were to put an electric motor on any of these, arguably you could then be charged with a DUI. Trains and snowmobiles are not vehicles per their explicit exception in the statute. But what about a horse or cow? Any animal could fit the definition of a vehicle, and in fact, there are cases where DUIs have been charged for suspects found under the influence while riding animals. What about while on a riding lawnmower? Absolutely. What about while using a jet pack like the guy from the 1984 Olympics Opening Ceremony? If you have access to that equipment, don’t get caught flying impaired or you could be charged with a DUI.

What about a car that won’t start, or better yet, one that has had the engine taken out, the gas completely siphoned out, and all four wheels removed? There’s no way you can get a DUI for sitting intoxicated in a car like that, right? Wrong. Here’s another part of the above statute:

“For the purposes of this Code, unless otherwise prescribed, a device shall be considered to be a vehicle until such time it either comes within the definition of a junk vehicle, as defined under this Code, or a junking certificate is issued for it.”

Here’s the definition of a junk vehicle:

Sec. 1-134.1. Junk vehicle. A junk vehicle is a vehicle that has been or is being disassembled, crushed, compressed, flattened, destroyed or otherwise reduced to a state in which it no longer can be returned to an operable state.

A car that has had the engine taken out, the gas completely siphoned out, and all four wheels removed is still capable of being returned to an operable state, and assuming it has not had a junking certificate issued for it, that car is still a “vehicle” under IL law and it’s inoperable condition is not a defense.

The last part of the statue we’ll look at is the language that reads “within this State.” Take note that it does not make any distinction between public and private property. Arguably, it does not indicate that “within the State” is even limited to the ground. In other words, boaters and airplane/helicopter pilots suspected of DUI are arguably fair game under this statute.

Given all the above information, would you like to change your answers to any of the above situations?

The correct answer is yes, you can be charged and possibly convicted of DUI in each of the above situations.

If you or a loved one are facing DUI charges, contact our office for assistance.

This article is in no way intended to be, nor should it be construed as legal advice and you should not rely on the information herein. I’m simply sharing some random thoughts and ideas, my experience, and I’m certainly not touching on every issue that is necessary to consider for any serious legal analysis.

Things To Do In Belleville, IL